A man who is alleged to have raped and murdered an internally displaced woman- Bapit Solange, at Dallas quarter in Foumban, Noun Division of the West region has been arrested and detained by security forces.

He allegedly raped and stabbed his victim Solange severally and dumped the corpse in a bush. The remains was discovered by a passerby who later informed the police.

Insecurity in Douala: 40-Year Old killed and Dumped in Well 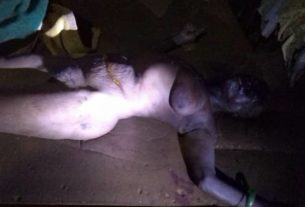