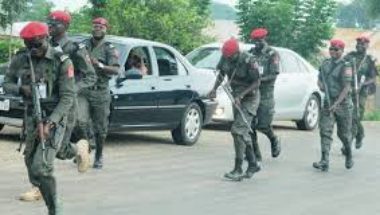 President Paul Biya matches words with action by deploying thousands of special elements of the National armed forces to combat separatist fighters who have refused to drop down their arms and plan to frustrate the February 9 twin elections. Close to 400 of them were recently deployed to Bamenda, North West regional chief town. They were welcomed by North West Governor Adolphe Lele L’Afrique as they arrived in military trucks. “Welcome to Bamenda. I urge you to be disciplined, serve in honour and loyalty the nation and the population of the North West region who anxiously await you because you are here for institution of peace. You are here to reestablish the truth between the population and the defence forces.” Said North West Governor Adolphe Lele L’Afrique. Legion commander for the North West put the security forces at the disposal of the administrative authorities of the region. They will in the days ahead be deployed in various parts of the region.

Cameroon: Head Of State’s Message To The Nation On Eve of National Day