He replaces Geoffroy Desire Mbock sacked in June 2019 after spending less than a year at the helm of the Gerenal Secretariat of Cameroon’s lower house of parliament.

Former CPDM Member of Parliament for the Nkam in the Littoral region of Cameroon had spent two mandates at the National Assembly and is thus accustomed to the house. He is well known for the sensitization and promotion of public services and programmes in favour of youths and children through a Parliamentary network called REJE.

He is equally a Graduate from institute D’admistration publique de Paris, and Ecole national D’Administration Paris.

He has also served at the presidency of Cameroon , the Economic and social council of Cameroon, the then ministry if National education amongst others.

Presidency of Cameroon Reacts To Macron’s Declarations on Biya. 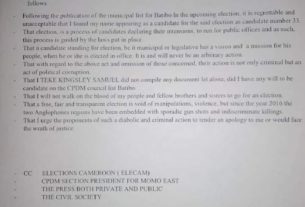