Archbishop emeritus of the Metropolitan archdioceses of Douala, his eminence Christian Cardinal Tumi has praised Cabral Libii for his political strides in such a short time, and age. Tumi sees the future of Cameroon in the likes of the young MP, PCRN National Chairman.

” I do not know if the young people who vaguely and unnecessarily spend their time insulting people see what is happening to Cabral Libii.

Succession is assured with Cabral Libii. He works and God helps him to move forward. I am particularly impressed.

Especially since he stays himself and thinks of Cameroonians who already love him so much. I think he is third in the ranking is already something.

This boy has something in him that will help this country and all of Africa in general. Those who are far away will never understand his fight. You have to be there to know that he no longer sleeps.

It was during the Grand National Dialogue that I noted the intellectual efficiency of this young leader. He knows how to listen and he has just solutions to the dimensions of the problems.

God gives to those who seek and ask in honesty.

He and his comrades are there to help Cameroonians. Let them try to be transparent in managing the little they will perceive.

Soon or in the years to come, he Cabral will be president here in Cameroon. As for me, I am convinced! 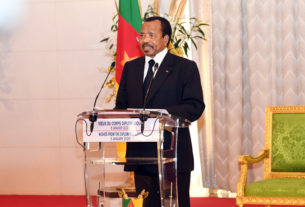